You may know him as Johnny Dowd or Jaybeau Jones and he has been in front of a microphone or programming radio stations in Providence, New York, Chicago, Philadelphia, Boston, Hartford and Worcester. His broadcast career highlights include JB 105 Providence from 1979-84; New York City’s Z-100, and filling for Rick Dees in 2007 on the national countdown show “The Rick Dees Weekly Top 40” heard worldwide. He is now part of the WROR family and he is also currently heard nationally on Sirius XM’s “70’s on 7.”


Roger Laliberte began his radio career in 1957 at WWRI in West Warwick where he started L’Echo Musical – a program that entertained the large French Canadien population in the area and carried timely information of concern to his audience. In 1963 he brought his French-language program to WWON in Woonsocket, and in 1985 he moved to WNRI where it still airs today and is broadcast worldwide on the Internet. In 2004, Roger realized his life’s dream of owning a radio station by becoming a partner at WNRI 1380AM.

Myrna Lamb was a radio personality on Providence stations WHJJ and WPRO where she hosted a variety of radio programs, first on astrology, then a general advice show syndicated on NBC and broadcast on 300 radio stations nationwide from 1990 to 1993. In 1989, she was a substitute host on the Sally Jessy Raphael Show and the following year a substitute host on the Dr. Harvey Ruben Show. On WPRO in 1999, her program’s “Political Girl Talk” weekly segment won first place in the annual Associated Press Awards, news/talk division. An astrologer, published author and teacher, Myrna died in 2014. Accepting on her behalf, longtime WPRO host and close friend Steve Kass.

Tony Mascaro is Program Director of WPRO-AM in Providence. A Hartford, CT native, Tony graduated from Rhode Island College with a degree in Mass Communications in 1983. While at RIC, Tony worked part-time on the air at WPRO-FM and upon graduation could be heard on PRO-FM full time – a total of 17 years! He was Music Director at WPLJ-FM in New York from 1997-2011 and Program Director of WABC-AM in New York between 2012-2013. Tony returned to Rhode Island and the Brine Broadcasting Center in 2014 to assume programming duties at 630 WPRO.

Dick Rakovan has two very important Rhode Island radio credits: In 1974 he became General Manager at WPRO AM & FM and over the next five years captained WPRO-AM’s defense against aggressive competitors WJAR and WGNG; and he took half-automated PRO-FM live and local 24/7 against newcomer JB 105. On Salty Brine’s 35th Anniversary, Dick named the Wampanoag Trail Broadcast Center after him. In 1979 as Senior VP of Outlet Broadcasting’s radio group, with stations in Los Angeles, Detroit, Philadelphia, Washington DC, Orlando, and Providence. Dick swapped AM 920 for the Taunton FM he re-named WSNE. He is retired Senior Vice President of the Radio Advertising Bureau.

Frank Kingston Smith began his Rhode Island broadcasting career in 1967 when Hall of Famer Bob DeCarlo hired him at WICE. His legendary voice was soon heard at WRKO Boston under the Bill Drake-assigned name “Bobby Mitchell” and then he used his real name at WABC-AM New York. He returned to Boston radio in 1974 where he worked for nearly 20 years at WHDH, WVBF, WBZ, WRKO, WROR, WKKT, and WODS. A private pilot, Smith has also served as master of ceremonies at air shows throughout the USA and he has continued to work as a voice over artist.

The Shepard Award recognizes the founders of radio in the Ocean State (John and Robert Shepard, owners of the Shepard Department Stores) and to honor present-day contributors to the industry through leadership, dedication, achievement, innovation and spirit – goes to Mowry Lowe – a pioneering New England newscaster, gifted announcer and premier radio executive.

The Station of the Year Award was presented to iHeart Media Providence to commemorate a successful multi-station food drive to feed the hungry in Rhode Island.

This year’s Legacy Station of the Year was WICE, represented by two of the Top 40 station’s legendary Hall of Fame DJs, Bob DeCarlo and Frank Kingston Smith. 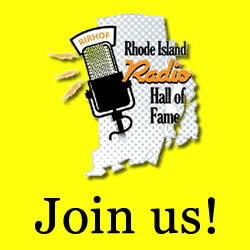